An article by Fintan Lane on the Irish social radical and political philosopher William Thompson (c.1775–1833) has been published recently in the May volume of the journal Irish Historical Studies.

Using a wide range of sources, the article traces Thompson’s business career, his falling out with his family and his increasing financial reliance on his small estate in west Cork. It is argued that this financial dependence greatly constrained his practical involvement with the Owenite movement and ruled out the establishment of a cooperative community on his land during his lifetime. Thompson was considerably less wealthy than has often been suggested.

The volume also contains an analysis by Michael Turner of the prominent Irish-born Chartist Bronterre O’Brien.

IRISH HISTORICAL STUDIES
Vol. XXXIX, no. 153 (May 2014)
Timothy D. Watt – ‘The corruption of the law and popular violence: the crisis of order in Dublin, 1729′
Fintan Lane – ‘William Thompson, bankruptcy and the west Cork estate, 1808-34′
Michael J. Turner – ‘Ireland and Irishness in the political thought of Bronterre O’Brien’ 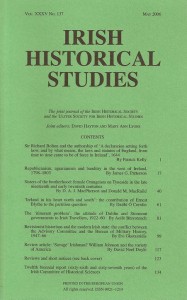