It is popularly assumed that the socialist movement in modern Ireland was initiated by James Connolly when he founded the Irish Socialist Republican Party in May 1896. In this seminal book, Fintan Lane challenges that myth by making available for the first time a detailed history of the beginnings of modern Irish socialism. Using original sources, Lane traces the development of socialism in Ireland from the influence of William Thompson, Marx and the First International through to the arrival of Connolly and the struggle for national independence.

In this study of radical political thought and leftist organisation, the author explores the radicalising effects of agrarian social movements between 1879 and 1882, the impact of resurgent nationalism, the influence of British socialism in Ireland and the emergence of 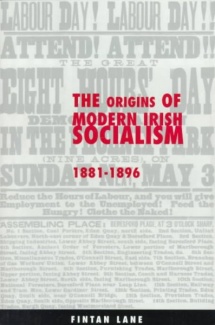 socialist organisations in Dublin in the 1880s. He also examines the leading role played by socialists in the politicisation of the labour movement and charts their changing position in relation to Irish independence. The picture that emerges is one of a tradition more diverse and more vibrant than previously believed, and Irish socialism is placed firmly within the context of the British ‘socialist revival’ of the 1880s and the 1890s. It is within this wider movement that we can now locate the origins of the Irish socialist tradition.

Among the organisations examined are the National Labour League, which led an unemployment agitation in 1887, and the Irish Socialist Union, whose members were centrally involved in introducing ‘new unionism’ into Ireland. Anarchism is also shown to have had some presence in Dublin in the 1880s and 1890s. In addition, the interaction between Irish agrarian leader Michael Davitt and Henry George, the American radical who greatly influenced the socialist revival in Britain, is explored and assessed.

This comparative study provides new and interesting information on the social history of late nineteenth century Ireland. In particular, it greatly improves our knowledge of working-class political life during the period surveyed and sheds valuable light on the international influences on the labour movement in Ireland at the time.

‘This book is not simply a compromise that attempts to please both sides in the debate on Irish labour history. On the contrary, the author, by standing between entrenched combatants, only invites fire from both sides. This work represents an excellent example of what comparative studies…can produce.’ – John Lynch, Irish Economic and Social History, vol.xxiv (1997).