Fintan Lane is an Irish author and historian, who specialises in the history of modern Ireland from the late eighteenth to the early twentieth century. He is 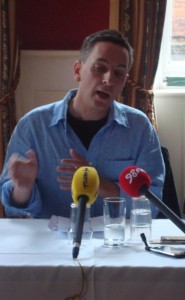 now working on William Thompson: The Life and Thought of a Radical, 1778-1833, a biography of the Irish-born political philosopher.

Lane graduated from University College, Cork with a PhD in history and has written or edited seven books, primarily on aspects of nineteenth-century social history. He was general editor, with Maria Luddy, of the ‘Radical Irish Lives’ series of biographies published by Cork University Press between 2001 and 2002, and was an editor of Saothar, the journal of Irish labour history, for five years between 2001 and 2005. He has also participated as a commentator in history documentaries on Irish television and has contributed to radio discussions on aspects of Irish history. Originally from Cork, he has lived at various times in San Francisco, Belfast and Germany, and currently resides in Dublin.